The Surname Orozco: From Vizcaya to Aguascalientes 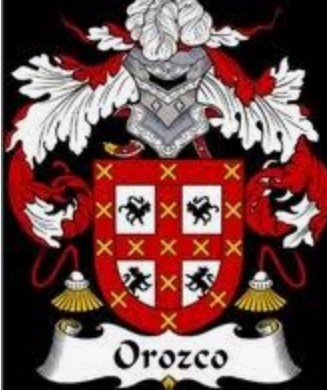 The surname Orozco (or Orosco) is a surname that has been prominent throughout both Spain and Mexico over the last few centuries.  According to Richard D. Woods and Grace Alvarez-Altman, “Spanish Surnames in the Southwestern United States: A Dictionary,” two elements form this surname: “oros” which means holly tree and the suffix “-ko” which suggests place. Orozco therefore means place of the holly trees.  Orozco is also believed to have been derived from the Latin word “orosius” – the son of bringer of wisdom.

However, Orozco is also widely accepted as a Basque surname that indicates that one is a descendant of the ancient Señores de Vizcaya. In the Dictionary of Surnames, Patrick Hanks and Flavia Hodges offered an alternative explanation for the surname Orozco, indicating that it was Basque and that the first element of the name may have derived from the Basque oru (plot of land).

It seems likely that the surnames Orozco (or Orosco) – in all their forms (i.e. single surnames or double surnames) – may have evolved from several points of origin in different parts of Spain. According to García y Carraffa’s Diccionario heráldico y genealógico de apellidos españoles y Americanos , one form of the surname, Orozco de Vizcaya, originated among ancient horsemen whose descendants moved to the city of Trujillo in the present-day province of Cáceres in the Extremadura region of western Spain.

García y Carraffa also noted that another branch of Orozco lived in the small village of Candeleda of the judicial district Arenda de San Pedro in the Province of Avila (Central Spain).  The progenitor of this family was Diego de Orozco, a native of Candeleda and Alcaide (Warden) of the village castle and the husband of Doña Isabel Monte, who was a native of Turégano in the province of Segovia. Their son was Diego de Orozco Monte, also a native of Candeleda, followed in the footsteps of his father as the Warden of the village castle. Diego married Doña María de Olmedo, a native of Arenas de San Pedro (which is just east of Candeleda).  This branch of the surname continued to occupy Candeleda for several generations.

The Oroscos Arrive in the Americas

With the migration of Spaniards to the Americas in the Sixteenth Century, several Orosco’s are known to have embarked to Nueva España (Mexico), including:

Persons with the surname Orozco are known to have played significant roles in the early history of both Nueva España and Nueva Galicia (which was the first Spanish name given for the areas now known as Aguascalientes, Jalisco and Zacatecas).  One of Hernán Cortés’ chief lieutenants in his conquest of Tenochtitlán (the Aztec name for the present day Mexico City) was Francisco de Orozco, who was believed to have come from Ubeda or Sanlúcar el Mayor. It was Orozco who first made his way to Oaxaca, claiming the region for Cortés and subduing the Mixtec inhabitants. He died in 1524 in Oaxaca.

Diego de Orosco from Toledo – mentioned above as a pasajero to Nueva España in 1535 and the son of Francisco Orozco –became one of the first 63 founders of Guadalajara in 1542.  According to Steven F. Hernandez and Tony Campos, other Orosco’s soon came to prominence in Guadalajara.  Juan Bautista de Orozco, who immigrated to Nueva España in 1566 (as noted above), was appointed an oídor of the Real Audiencia de Guadalajara in the same year and served in that position until 1571.

Dr. Gerónimo Orozco and the Founding of Aguascalientes

Juan Bautista de Orozco’s brother, Gerónimo de Orozco y Lerma, was believed to have been born in Sevilla sometime between 1518 and 1522, as speculated by Hernandez and Campos. Sometime after arriving in Nueva España, Gerónimo became a licenciado (lawyer or attorney) with a degree from the University of Salamanca. Then in 1559, he obtained a doctorate in law from the University of Mexico.

For fifteen years up to 1572, Doctor Orozco served as an oídor in the Real Audiencia. His life is described in great detail by Steven Hernandez and Tony Campos in their article, “Basic Foundations of Significant Families of Mexico: Tello de Orozco,” in the SHHAR Genealogical Journal, Volume 5 (2003).

On December 15, 1574, Dr. Geronimo de Orozco y Lerma took office as the Governor-President of the Royal Audiencia of New Galicia. From his headquarters in Guadalajara he played an important role in organizing the settlement of the Villa de la Asunción de las Aguas Calientes (Villa de Aguascalientes). On October 22, 1575 Orozco signed the certificate of foundation for the new villa, which today is a major urban center of Mexico.

Gerónimo de Orozco established Aguascalientes during the long Chichimeca War, in which the native peoples of the area attempted to stop the Spanish advance and waged a very effective guerilla warfare against the Spaniards and their indigenous allies from the south (i.e., Christianized Indians).  The intensity of the Chichimeca War led to numerous engagements.

Some researchers have stated that Geronimo Orozco was killed during a skirmish between Chichimecas and Spanish troops either in December 1580 or in April 1581. However, Hernandez and Campos have stated that Gerónimo continued to serve as the Governor until his death in 1592. Dr. Gerónimo de Orozco married Beatriz Tello de Sandoval around 1554 or 1555 and, together, they had ten children, including the following:

The descendants of Gerónimo and Beatriz and their many children are discussed in great detail in Steven Hernandez and Tony Campos’ article cited above and in the sources at the end of this story. Anyone who has Orozco ancestors should consult this work to see if they have any connections to this lineage, which is extensive throughout several parts of Mexico and discusses seven generations of Orozco’s.

By 1582, the threat to the small villa of Aguascalientes became so serious that the population had dwindled to one military commander, 16 soldiers and two citizen residents. In effect, the small settlement – located in the middle of the war zone – was under siege. But in the late 1580s, the threat of Indian attack diminished steadily, as the Spanish authorities attempted to negotiate a peace with the Indians of the region. The last Indian attack took place in 1593, after which the threat of hostile attack disappeared entirely and the region experienced a new peace.

The new-found peace of the 1590s, according to the historian Peter Gerhard, “brought a tide of Spanish settlers beginning in the 1590s, mostly cattlemen and farmers, together with Indian and Negro retainers.”  By 1610, the small town of Aguascalientes had approximately 25 Spanish residents, about fifty families of mestizos, at least 100 mulatos, twenty Black slaves, and ten Indians.

By 1616, the Parish records at Nuestra Señora de la Asunción de Aguascalientes mention La Estancia de Santiago as the property of one Jerónimo de Orozco and his wife, Doña Ángela Temiño de Velasco. Some researchers have stated that Jerónimo was a descendant of Alberto de Orosco, a first cousin of Geronimo de Orosco y Lerma, the founder of the city. Angela, for her part, was a great-granddaughter of Hernán Flores de la Torre, a conquistador of Nueva Galicia, and his wife Maria Alvarez de la Torre.

On September 24, 1618, Jerónimo and Angela had their son, Juan, baptized in the Parish Church. Another child, Maiana, was baptized on January 5, 1623. During the first few decades of the parish, Jerónimo, his wife and his children and grandchildren would serve as padrinos for many of the baptisms and marriages that took place in town.

The first known marriage of an Orosco in the Aguascalientes parish records was the marriage of one Diego de Orosco – another son of Jerónimo and Angela – who married Doña María Medel on April 14, 1637.

By the time of the 1648 Padron (church registry or census), Angela de Velasco – now the widow of Geronimo – was living with her family in “La cassa de Geronimo de Orosco” with her son Diego, her grandchildren and a large number of servants. By this time, Diego had lost his first wife, and had married a second wife, Maria de los Ynojos, and now had two children with her.

According to J. Ignacio Avila Garibi, Don Juan de Villaseñor Orozco was among the founders of Valladolid de Michoacán (later known as Morelia, the capital of the State) and the encomendero of Huango, Puruándiro and other cities. It is believed that he was born at Vélez de Castilla in Spain around 1500 and he died in 1566 at Tacámbaro, Michoacán.  He was married to Doña Catalina Cervantes de Lara (a native of Sevilla, Spain) and they are believed to be the ancestors of a long line of notable individuals in Mexican history.

Through their son, Federico de Villaseñor y Cervantes de Lara, Juan and Catalina were the great-great-great-great-great-grandparents of Don Miguel Hidalgo y Costilla, the priest from the city of Dolores in Guanajuato who led the first battles of the Mexican Revolution in 1810. Dolores would later be renamed Dolores Hidalgo in his honor and that is the name it carries today.

Through another son, Diego, Juan and Catalina were the great-great-great-great-great-great-grandparents of Don Agustin de Iturbide, a native of Morelia (1783), who played a significant role in the last part of the Mexican Revolution, eventually becoming Emperor of Mexico and then losing his life in 1824.

Persons with the surname Orozco (or Orosco) have continued to play significant roles in Mexican political and cultural life. According to Wikipedia, José Clemente Orozco (November 23, 1883 – September 7, 1949) was a Mexican social realist painter who specialized in bold murals. Living around the same time, was Pascual Orozco Vazquez (28 January 1882 – 30 August 1915) who was a Mexican revolutionary leader. The surname in both forms continues to be fairly prevalent in some parts of Jalisco, Zacatecas and Aguascalientes, as well as other parts of the country.

Hardy, Rose and Valdez, Dave. A genealogical look at the 1648 padron of Aguascalientes (2010).