Cesar Chavez: Roots Deep in the Heart of Chihuahua 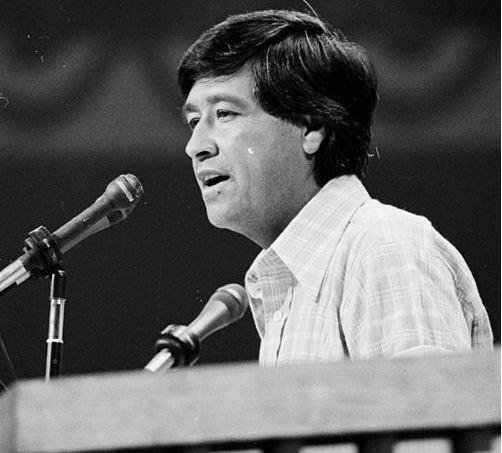 Cesar Chavez was an American hero, a person who was admired by both his supporters and his adversaries. In grammar school, many students learn about his advocacy and dedication to his causes, but few people know much about his roots.  Nearly everyone knows that Cesar Estrada Chavez was born on March 31, 1927 near Yuma, Arizona. The Arizona State Board of Health Certificate of Birth Number 594 states that Cesario Chavez was the legitimate son of Librado Chavez (38 years old, a farmer born in Mexico) and Juana Estrada (35 years old, a housewife also born in Mexico). His birthplace was listed as “North Gila Valley” in Yuma County. A copy of that birth record has been reproduced below [Arizona Department of Health Services, “Arizona Genealogy Birth and Death Certificates: Index.” Online: http://genealogy.az.gov/].

Most of us know that Cesar was named after his grandfather, Cesario. His family spent a few decades in Yuma County, Arizona, after emigrating from Mexico, but most people do not know about his family ties to Mexico.  Cesar’s father Librado Chavez was himself the son of Cesario Chavez and Dorotea Hernandez. This information is widely known since Cesar had a rather large family and some information about his family has been published online.

Librado was one of about eleven children, most of whom were born in Mexico, although it is believed that the last two were born in the United States. In fact, it has been stated that Librado’s younger brother, Felipe Hernandez Chavez, was born on February 3rd or 5th of 1890 in El Paso Texas (and died sometime after 1911).  However, this account is incorrect. According to the Catholic Church records in Juarez, Chihuahua, Felipe Chaves was baptized on March 2, 1891 by Father Ramon Ortiz, the pastor of Nuestra Señora de Guadalupe Church.  The baptism record for Felipe states that Felipe was born on February 5, 1891 as the legitimate son of Cesario Chaves and Dorotea Hernandez, both of whom were originally from Carmen.

The abuelos paternos listed were Nepomuceno Chaves and Juana Flores. The abuela materna was given as Maria Rufia, with no explanation given for the lack of a father or a surname.  This baptism can be viewed on Film 162708 of the Family History Library (Reference Number: 25-77) and is shown in the following image. [Note that the designation AP means Abuelos Paternos (Paternal Grandparents) while AM means Abuelos Maternos (Maternal Grandparents).

Most researchers who have studied the Chavez family already knew that Cesario’s father’s name was Nepomuceno Chavez (Cesar’s great-grandfather).  Aside from knowing that he was from a place called Villa del Carmen, very little is known about Nepomuceno.  However, anyone doing research in La Ciudad de Chihuahua in the middle of the Nineteenth Century will come across Nepomuceno Chavez and his wife Maria Juana Flores.

Nepomuceno had many children, the exact number still unknown at this time. However, their first-born was Jose Luis Gonzaga Chavez Flores, who was baptized on June 23, 1831 in El Sagrario in the City of Chihuahua.  In the next two decades more children followed, including Epifana Juana (1840), Jose Manuel de Jesus (1842) and Maria Tiburcio Aniseta (1849). While most of the kids were born in La Ciudad, Jose Manuel was baptized in Santa Cruz de Rosales.

Nepomuceno and Juana would have children for almost twenty years. The last child born to Nepomuceno and Juana was Jose Sesario Trinidad Chaves, and this is the man we know of as “Cesario Chavez” – the grandfather of Cesar Chavez. “Sesario” was baptized at Nuestra Señora de Regla de Chihuahua Church on March 2, 1851 by Father Gavino Rodela. The baptism states that he was born on the 25th of the previous month (February) and that he was the son of Juan Nepomuceno Chaves and Maria Juana Flores.  The abuelos paternos were Ramon Chaves and Ramona Anchondo. And the abuelos maternos were Pablo Flores and Sabina Granados. The four grandparents listed in the baptism of Sesario Chavez are the great-great-grandparents of Cesar Chavez. This baptism can be viewed on Family History Library Film Number 162668.

At this point we have established that Cesar’s paternal great-grandfather was born 76 years before he was born (1927).  But Cesario was the last son born in a very large family. As such, his parents were married long before his birth. The Parish Church in La Ciudad de Chihuahua contains a very detailed record of Nepomuceno’s and Juana’s marriage.

The record states that on June 28, 1830, Father Mateo Sanches Alvarez married Nepomuceno Chaves and Juana de Dios Flores. Nepomuceno was described as the legitimate son of Ramon Chavez and of Ramona Anchondo. Juana was described as the daughter of Pablo Flores and Sabina Granados. The parents of the bride and groom are, as stated earlier, the great-great-grandparents of Cesar. The witnesses were Rafael Anchondo and Maria del Refugio Chaves, relatives of the newlyweds.

It is not entirely clear when Nepomuceno Chaves was born or whether he was born in La Ciudad de Chihuahua or in General Trias (which was then known as Santa Isabel). His brother Juan Ramon Chaves was baptized in Santa Isabel on March 26, 1818, and his younger sister, Maria Ramona de Jesus, was born four years later in La Ciudad (on November 24, 1822).

Ramona’s baptism reported that she was baptized by Father Angel Molinar at Nuestra Señora de Regla de Chihuahua church when she was seven days old. She was the daughter of Ramon Chaves and Ramona Anchondo. The abuelos paternos were Tomas Chaves and Antonia Guarin. The abuelos maternos were Christobal Anchondo and Maria Conigunda Escañuela.  This set of abuelos represent the next generation back: the great-great-great-grandparents of Cesar Chavez.The baptism of Maria Ramona Caves can be viewed on Film 162665.

Nepomuceno married Juana in 1830 when she was only 14 years old. Juana was a local girl, born and bred in La Ciudad. On March 15, 1816, when she was eight days old, Juana’s parents took her to the church to be baptized by Father Mariano Prado. Juana de Dios Reymunda de Jesus Flores – the future wife of Nepomuceno Chavez and the future great-great-grandmother of Cesar – was baptized with holy oil and recorded as the legitimate daughter of Pablo Flores and Maria Savina Granados. The abuelos paternos were “no conocidos” (not known), but the abuelos maternos were Jose Granado and Paula Zuniga.

It is not clear when or where Pablo Torres and Sabina Granados were married (at this point in time), but it is clear that they had a very large family. One of their earlier children, Maria Eusevia Flores, was baptized on March 7, 1803 in San Lorenzo (Doctor Belisario Dominguez).  But their next child, Francisco de Paula de Jesus Vensor, was baptized on July 15, 1805 in the Church in La Ciudad of Chihuahua.  Two more daughters were born in La Ciudad in 1808 and 1813 before Juana came along in 1816.

Although the baptism for Pablo Torres has not yet been located, the baptism of Maria Savina Granados on June 14, 1776 in San Lorenzo has been located. It is noteworthy that Savina was born 151 years before the birth of Cesar Chavez and weeks before the American Declaration of Independence was signed.  The very beautiful and detailed baptism record of Savina reveals to us that Father Manuel Cadaval baptized Savina when she was six days old and that she was the daughter of Juan Joseph Granados and Juana Paula Suniga, “legitamente casados” (a legitimately married couple). The baptism of Savina is on Family History Library Film Number 162584.

Juan Jose Granados and Juana Paula Zuniga had several children. Research into this line will eventually trace the family back a few more generations. While we cannot yet determine when the couple was married, it does seem likely that the family may have alternated back and forth between San Lorenzo and La Ciudad de Chihuahua.

One fact that seems certain is that the Maria Paula de Suniga (Zuniga) who was baptized on February 5, 1748 in La Ciudad de Chihuahua is the mother of Savina and the wife of Juan Jose Granados.  Maria Paula was the daughter of Ygnasio Martin de Suniga and Francesca Figenia de Luna.

We bring this search to a conclusion (for today), with a determination to find more information at a later date. Ygnacio Martin de Zuniga married his bride, Francesca Figenia de Luna, in the church at La Ciudad de Chihuahua on February 21, 1747.

Together, Ygnacio Martin Zuniga and Francesca Figenia de Luna represent seven generations back from Cesar Chavez, representing one set of great-great-great-great-grandparents of the famous civil rights leader, as illustrated below:

A Son of Chihuahua

From the preceding materials, it has become evident that Cesar Chavez had roots deep within the state of Chihuahua. American-born, Cesar Chavez was dedicated to American causes but was also a son of Mexico and of the State of Chihuahua. And the search for his ancestry was made possible because the baptism records in the churches of Chihuahua after 1800 show the abuelos of each child being baptized (with some exceptions).  When six names are given in a document of birth, the search for earlier generations is made easier.