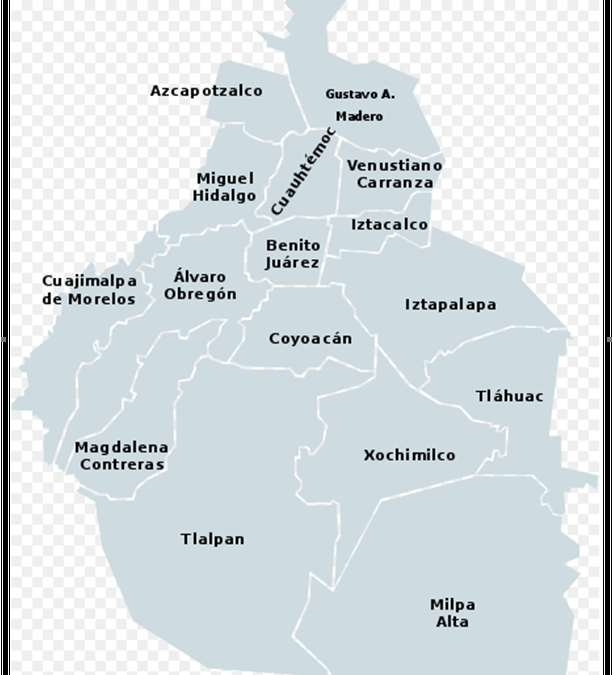 Each part of the Mexican Republic has a unique and fascinating history, but a great deal attention has been given to the Indian groups that inhabited central México, in particular the present-day Distrito Federal (Federal District), known more commonly as Mexico City. In fact, in 2016, the Federal District’s name was changed to the State of Mexico City. Nearly 500 years ago, Hernán Cortés marched his small army of Spaniards and indigenous allies inland from Veracruz to confront the might of Emperor Moctezuma in Tenochtitlán. And, as a result, a patchwork of native kingdoms became the colonial fiefdom of a European monarch (the King of Spain).

The former Distrito Federal (D.F.) is located in the south central portion of México. It shares borders with the states of México (on the west, east and north) and Morelos (on the south). The District occupies 1,495 square kilometers, which is equal to 0.08% of the national territory. It is the smallest entity of the Mexican Republic, behind the 31 Mexican state. The 2010 population of Distrito Federal was 8,918,653, which is 7.5% of the total Mexican national population. Politically, the District has no municipios, but is divided into sixteen political districts (delegaciones).

As a territory, DF lacked the political rights of other Mexican states. However, in 2016, the Distrito Federal officially changed its name to Mexico City State (CDMX) and its sixteen delegaciones became known as “demarcaciones.” Thus, in 2016, Mexico City became the 32nd state of Mexico’s federation. CDMX’s sixteen demarcaciones are shown in the following map [EOZyo, “División Política del Distrito Federal” (Sept. 19, 2008)].

Mexico’s federal constitution was reformed in January of 2016 to allow for the emergence of Mexico City State (CDMX), an entity with its own congress, constitution, local governments, and fiscal rules. This was a fundamental change for investors and traders because it implied that the country’s most important city, the one that received 30% of all foreign investment (as of 2015) and produced about 21% of all Mexico’s gross total product (as of 2013), was changing its rules of operations. Now local authorities have much more autonomy from the federal government.

The Neovolcanic Axis — also known as the Trans-Mexican Volcanic Belt — is a volcanic belt that crosses central Mexico from Colima and Jalisco in the west to central Veracruz in the east. Several of its highest peaks have snow all year long.

The Valley of México

Today – as in the past – México City, the Federal District, and the State of México represent both the economic, cultural and political center of the Mexican Republic. The Valley of México, which became the heartland of the Aztec civilization, is a large internally drained basin that is surrounded by towering mountain ranges, including the Popocatépetl (Smoking Mountain) and Ixtaccíhuatl (Mountain of White Woman) volcanoes.

According to the following map, the Valley of Mexico (Valle de México) — shaded in red — takes up the entire Federal District (now the CDMX) and the eastern part of the State of México [Luan, “Mapa de Localização da Megalópole do México” (May 7, 2018)].

The preceding map also shows some of the surrounding urban areas that were occupied by Náhuatl-speaking people who lived outside of the Mexica capital, Tenochtitlán, in areas that became parts of the Mexican states of Mexico, Morelos, Tlaxcala and Puebla.

México City itself was built on built on the ruins of Tenochtitlán, which was the capital of the Aztec Empire. Over the millennia the Valley of México’s inhabitants have included the ancient Aztec (Mexica), Toltec and Chichimeca tribes, cultures which left a wealth of relics and ruins in the area that continue to attract and amaze tourists.

The Náhuatl Language in 1895

The Mexican Census of 1895 provides us with our first window into the usage of the Náhuatl language in the entire Mexican Republic after independence was achieved in 1821. As revealed in the following graphic, only 2.4% of Náhuatl speakers in the entire country lived in the Distrito Federal. However, nearly all (96.7%) of the indigenous speakers in Distrito Federal were Náhuatl speakers.

The Federal District in the Twentieth Century

In the following chart, the reader will see the population of the Federal District from the time of the 1900 census to the 2000 census. I have also provided comparable statistics for the Mexican Republic for the same years.

As noted in the preceding chart, Distrito Federal — as a center of attraction for both migrant labor and international immigration — has always boasted a significant share of Mexico’s national population, increasing from 3.98% in 1900 to 10.14% in 1990. However, by 2000, the District’s share of the national population had dropped to 8.83%.

In the unique 1921 Mexican census, residents of each state were asked to classify themselves in several categories, including “indígena pura” (pure indigenous), “indígena mezclada con blanca” (indigenous mixed with white) and “blanca” (white). Out of a total district population of 906,063 people, 169,820 individuals (or 18.75%) claimed to be of pure indigenous background. The significance of this census data indicates that while many of the descendants of the Mexica and other indigenous groups in the Federal District may have not spoken their ancestral tongue, they did indeed profess to be of indigenous background and culture.

A much larger number – 496,359, or 54.8% – classified themselves as being mixed, while 206,514 individuals (22.8%) classified themselves as white. The significance of this census data indicates that while many of the descendants of the Mexica and other indigenous groups in the Federal District may have not spoken their ancestral tongue, they did indeed profess to be of indigenous background and culture.

The Federal District in the 1970 Census

The largest language groups spoken out of this tally were: the Náhuatl (15,039 persons), Otomí (14,714), Zapoteco (14,109), Mixteco (7,513), Maya (4,341), Mazahua (4,286), and Purépecha (2,148). Already, the migrant population from the southern states had brought forth significant numbers of Mixtecs and Zapotecs from Oaxaca and Maya from Chiapas and Yucatán. In fact, the Zapotec and Mixtec speakers represented nearly one-third of all the indigenous languages speakers (31.4%) in 1970.

The Federal District in the 2000 Census

In the 2000 census, the Zapotecs and Mixtecs appeared to be evenly distributed through the various delegaciones. Their significant presence in the Federal District was an obvious testament to the migrant nature of the Distrito Federal’s population, where 1,827,644 persons – or 21.24% – stated that they were born in another political entity. Of this total, however, natives of Oaxaca – numbering 183,285 – represented 10.03% of the total migrant population. Only the states of México and Puebla contributed larger numbers of migrants to the District.

Migrant Indigenous Speakers in the DF

Because the population of the Federal District has robust access to education, health services, basic services, it has been an important center of attraction for other states. With its favorable conditions of housing, infrastructure and communication channels, its indigenous language speakers come from all parts of the Mexican Republic.

In 1990, 83.0% of its indigenous speaking population came from another state, and in 2000, that figure dropped only slightly to 79.1%. This drop may have been due to Mexican peso crisis that took place in 1994 when the Mexican government suddenly devalued the peso against the U.S. dollar.

More than one-quarter of the 123,224 indigenous speakers 3 years and older in Distrito Federal in the 2010 census spoke the Nahuatl language.  Of the Sixty-seven languages spoken in the D.F., the number of percentage of the top ten languages are shown in the following table:

The following table shows the delegaciones of the Distrito Federal that had the most significant populations of indigenous speakers in 2010:

The delegación of Iztapalapa in the northeast part of the D.F. had almost one-quarter of the indigenous speaking population in 2010. The delegación of Gustavo A. Madero in the far north of the entity and Tlalpan in the southwest had another one-fifth of the population (20.6%).

Nearly five hundred years after the conquest and destruction of the Aztec Empire, the culture, language and spirit of the Náhuatl, Otomí, Mazahua and other indigenous peoples remains intact within the central Hispanic culture to which most of them also belong. It is worth noting that, although the Mexica capital Tenochtitlán was occupied after an eighty-day siege, many of the indigenous peoples of Central México quietly submitted to Spanish tutelage. In this way, they were given an opportunity to continue speaking their languages and to retain some elements of their original culture, while becoming an integral and important part of a new society. The legacy of Central Mexico’s indigenous people lives on.